Exposure for Chloroplastes from out of Holland

It started with a phone call from a magazine in Holland, or better known as “The Netherlands”. This magazine “De Tuin” (the garden) selected Chloroplastes to give an interview about gardening in Crete.

The final article was placed in their autumn 2020 edition. Of course, the original article is written in the Dutch language. But, we have translated the article and hope you will enjoy the story.

How should we garden with a changing climate?
The last dry and warm years have irrevocably impact on how we interact with in the future dealing with our gardens.

Which plants can those changing weather conditions On? We took a look at it on the Greek island of Crete where we got an explanation about the drought-resistant garden.

Our visit to Crete

While visiting Crete it was tempting to visit a green company. The choice stood out Chloroplastes – Gardens & Nursery where we met with Stelios and Annika Kyparissis.

Stelios is from Thessaloniki and studied forestry in both Greece and England. Annika is originally from Germany where she studied landscape architecture. A company like Chloroplastes is exceptional in Crete.

‘Over here we distinguish ourselves, because we cultivate a lot of plants ourselves in order to guarantee the variety authenticity and because here in the neighbourhood you barely find any nurseries’, says Annika.

The construction of gardens in Crete is in its infancy, the Cretans rarely do self gardening. ‘It turns than mostly to it remodel from own vegetables and fruit.’ The gardens that it company realizes, belong almost always to vacation/rentals from foreigners.

“Very often we deal with customers that have little or no green knowledge. Their starting question is therefore often the same; a good looking garden with little maintenance. They come here after all to relax.’

This immediately explains why there are both coastal and mountain plants at the nursery because the gardens of their customers are spread out.

What is also striking, is the number of native plants. The couple’s philosophy is to connect every garden as much as possible to the surrounding nature. “That’s how you borrow it to you advance.”
It is striking that more and more of their customers also ask for natural-looking gardens. Often those people have some knowledge about nature and take a lot of walks on the island.

“Who does that is convinced immediately because the natural planting here is fascinating and colourful.”

Annika takes Oliver’s book The making of Cretan landscape Rackham and Jennifer Moody, a major source of inspiration. “With Oliver, we went into nature here several times to learn about what grows here and under what circumstances.” Also, the couple has good contacts with the botanical garden of the nearby city of Chania.

“We learned a lot there about the native and sometimes endemic plants of Crete. Much of it can be used in the gardens that we create here. That is a very interesting aspect of our work. “ 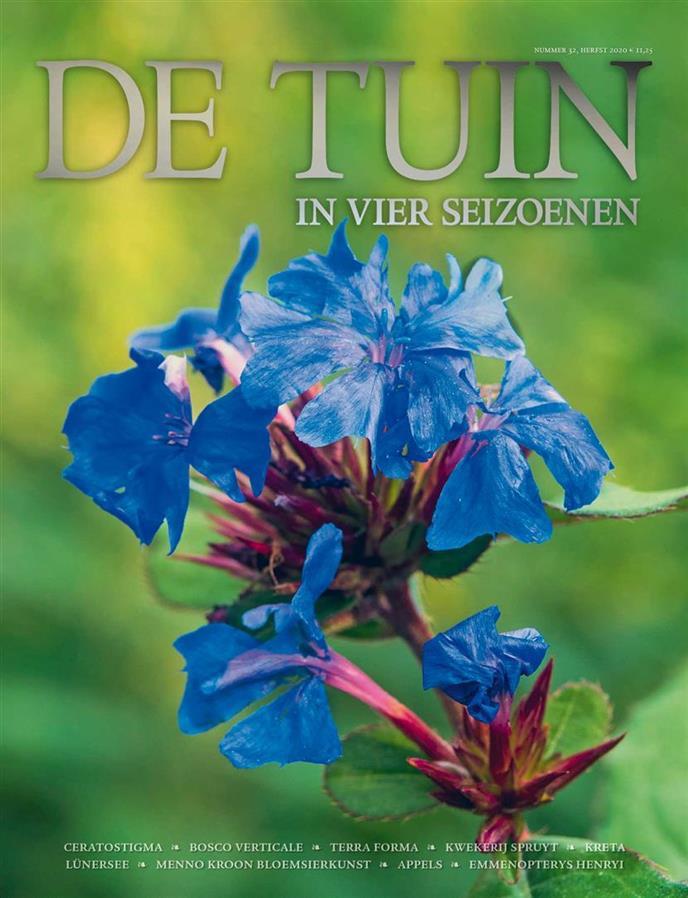 The nursery is modest, still under construction. In the small show garden against the road, many plants are already quite mature. “This makes it easier for customers to choose from.” The plants are arranged in a natural way between large boulders, as you would find them in nature.

Of course, they are drought and heat resistant plants. Because Annika also knows German garden culture well, she is very good at naming which plants she uses here can also withstand the increasingly warmer and drier summers in the Netherlands.

The eye catches the grey-leaved plants, many of which are known to withstand drought and sun well. Good to apply in the Netherlands is Artemisia “Powis Castle”. Other grey-leaved plants suitable for a dry, sunny spot in the Dutch garden are Ballota pseudodictamnus, Phlomis fruticosa (next to it grows the similar native P. cretica), Helichrysum italicum and some Eryngium.

Native is again tachys cretica, which we can replace in the Netherlands with Stachys byzantine. Naturally, the nursery also has Lavandula such as L. stoechas, L. dentata and L. x allardii. “For the Netherlands, and also Germany, where I spent a lot of time with gardens until after my studies, which is difficult because they don’t like the wet. Especially L. angustifolia is much more suitable there. You can also do well in the Netherlands with rosemary that does well here what to do, as with various types of thyme. “

Gray-leaved Salvia is also there, such as the native S. pomifera and S. triloba. ‘Comparable to the much stronger S. officinalis and its cultivars in the Netherlands.’ In the Netherlands, a ‘red-list plant’ is the grey-leaved Glauciumflavum, which can still be found on Texel, for example. ”

This yellow horn poppy is a coastal plant that likes it well here. has its way ‘. Looking further within the grey, plants that we treat as annuals or container plants in the Netherlands stand out: the Teucriumfruticans “Agadir” that can be cut into shape and the richly flowering Convolvulus neorum.

Annika mentions Agapanthus (praecox and africanus), Verbascum species, Euphorbiacharaciassubsp as other rich flowering plants for gardens on Crete. wulfenii, Verbenabonariensis and Hemerocallisfulva. It is surprising that Ajugareptans is a popular shade plant on Crete. “All also suitable for Dutch gardens.” The nursery and show garden naturally show many other plants, many of which Annika reports that they are really too vulnerable for us.

Cistus is a plant that is common in nature on Crete. Annika and  Stelios cultivate various cultivated Cistus as well as some native ones. There are differences in flower colours and leaf shapes; sometimes they are minimal, but they all love the Greek sun. “The sensitivity to wetness is difficult, so drainage can be useful when planting in the Netherlands.” More about Cistus can be read in De Tuin in four seasons issue 7.

The show garden also includes (ornamental) grasses such as the well-known pampas grass Cortaderiaselloana with the smaller cultivar “Pumila” and the species S.calamagrostisen S.tenuifolia from Stipa.

All good to use with us. It is different with Pennisetum, of which P. orientale is popular here, for the Netherlands P. alopecuroides is by far the strongest. “We also like to make groups of the indigenous Hyparrheniahirta. This does require some explanation from the customer, because this grass grows a lot here on roadsides and on slopes. That scares. “

The garden that we then visit belongs to Norwegian owners who regularly stay here. The garden parts are built upon a terrace, sometimes plants bend down along the retaining walls, others climb up against them. Indigenous seeders grow in the joints. There are various shrubs and trees to admire that also enjoy themselves in the Netherlands.

Among the shrubs Rhaphiolepis indica, Vitex agnus-castus and Spartium junceum stand out. Surprisingly, this Cretan garden also grows Berberis and Ilex aquifolium. Cercis siliquastrum stands out among the trees. “More towards the cold mountains, we always choose Cercis canandensis, which is more resistant to frost and moisture.” Broussonetia papyrifera also develops into a large tree on Crete and is decorative with its variable leaf shape.

“Certainly to be planted in the Netherlands, the tree stays smaller there and rarely produces orange false fruits.” Furthermore, Morus grows, both M. alba and M. nigra. As an evergreen tree, she calls Quercus ilex, the popularity of which is already on the rise in the Netherlands.

“The well-growing cork oak, Q. suber, seems like a borderline case to me.” She also mentions Paulownia tomentosa, Albizia julibrissin, Ficus carica, Diospyros kaki and varieties of Tamarix and Carya as heat- and drought-tolerant trees.

A striking feature is the small-leaved Zelkova abelicea, endemic to the island of Crete and called Cretan Zelkova there.

“Not really suitable for the Netherlands, somewhat comparable is the stronger Nothofagus antarctica.” The garden also has good examples of topiary with Laurus nobilis and the Pittosporum, Metrosideros, Nerium and Myrtus, which are too frost-sensitive for the Netherlands. Annika advises us for Viburnum tinus, Photinia x fraseri “Red Robin” and Elaeagnus ebbingei, which also do well on Crete.

“And Phillyrea angustifolia and latifolia, currently borderline cases in the Netherlands.” She finds Rosmarinus very suitable for lower massifs. “So don’t panic if the climate starts to warm up. There are still more than enough plants left,” Annika ends with a smile.

Please tell us your garden desires and we will transform them into reality.

How to plan your garden design in Crete? There are three ways; hire a professional landscaping company (quality for money), ask a local garden center, or you do it yourself Table of Contents Hire a Landscaping Company We keep your budget in mind We have the heavy equipment A Garden…

The 4 best landscape training opportunities in Crete, Greece Hello and welcome to this blog article. You ask yourself….how do I become a landscaper? Well, you came to the right place, we can answer that question for you. We at Chloroplastes are the leading landscaping company in Crete. Table of…

This is the beetle inside your palm tree. Killing the tree if you not tackle it the right way. The beetle that came to Crete with one thing on its mind, to kill your palm tree. Table of Contents The Red Palm Weevel How do they grow? What do I…

Quality and Landscaping in Crete, Greece Quality in landscaping is not only the quality of the work or service performed. No, it stretches way beyond that point. In a nutshell, quality according to the ISO 9001 standard is; to assure that the customer receives the product or service as advertised….

This website uses Google Analytics to improve your experience on our site. We'll assume you're ok with this. Privacy-Policy ACCEPT
Manage consent

This website uses cookies to improve your experience while you navigate through the website. Out of these, the cookies that are categorized as necessary are stored on your browser as they are essential for the working of basic functionalities of the website. We also use third-party cookies that help us analyze and understand how you use this website. These cookies will be stored in your browser only with your consent. You also have the option to opt-out of these cookies. But opting out of some of these cookies may affect your browsing experience.
Necessary Always Enabled
Necessary cookies are absolutely essential for the website to function properly. This category only includes cookies that ensures basic functionalities and security features of the website. These cookies do not store any personal information.
Non-necessary
Any cookies that may not be particularly necessary for the website to function and is used specifically to collect user personal data via analytics, ads, other embedded contents are termed as non-necessary cookies. It is mandatory to procure user consent prior to running these cookies on your website.
SAVE & ACCEPT